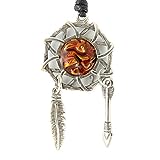 Superb finely made and detailed pewter native American Indian dream catcher pendant featuring a feather and an arrow dangling from the bottom and in the centre is the instantly recognisable Kokopelli character finished in a lustrous red resin – brand new and retail packaged. It comes ready to wear on an adjustable cord (approx 14″ to 30″ long) although it would look fine on your own favourite chain. Kokopelli is a prehistoric deity, a fertility god, a prankster, a healer and a story teller. Often depicted as a humpbacked flute player, this mythic being has survived in recognizable form from Anasazi times to the present – the Anasazi or Ancient Ones being farmers on the Colorado Plateau over 3000 years ago. Although his true origins are unknown, this travelling, flute-playing Casanova is a sacred figure to many South western Native Americans. Carvings of him have been found painted and carved into rock walls and boulders throughout the Southwest and further afield over 1000’s of years. There is something appealing about Kokopelli which fascinates all kinds of people, even in our modern technological age. There are many myths of the famous Kokopelli – that he travels from place to place bringing changes of the seasons – that the hunch on his back depicts the sacks of seeds and songs he carried – whatever the true meaning of Kokopelli is, he has been a source of music making and dancing, and spreading joy to those around him. Dream catchers were originally designed to hang over people’s beds so that only good dreams could get through – any bad dreams would be caught in the ‘net’ and then they would disappear when the sun came up and the good dreams would slide down the feathers to the sleeping person. As a pendant this can apparently catch any harm that might be in the air just as a spider’s web catches and holds whatever comes into contact with it. It is a lovely piece of jewellery full of ancient mysticism, power and charm – a perfect gift or a treat for yourself!

This website uses cookies to improve your experience while you navigate through the website. Out of these, the cookies that are categorized as necessary are stored on your browser as they are essential for the working of basic functionalities of the website. We also use third-party cookies that help us analyze and understand how you use this website. These cookies will be stored in your browser only with your consent. You also have the option to opt-out of these cookies. But opting out of some of these cookies may affect your browsing experience.
Necessary Always Enabled

Any cookies that may not be particularly necessary for the website to function and is used specifically to collect user personal data via analytics, ads, other embedded contents are termed as non-necessary cookies. It is mandatory to procure user consent prior to running these cookies on your website.